A Journey Through
the Ancient Lands of Egypt

We are naturally drawn to the Mystery; that which lies hidden and carries a mystical essence, beckoning our Spirit to it. The calling toward the Great Unknown holds the wisdom of the ages, ready for us to engage in and remember.
The ancient lands of Khemet (Egypt) have been magnetizing people attuning to this particular call from Spirit for aeons. This place embodies deep inquiry into the ancient past that still stands, as we work towards rebuilding the future. 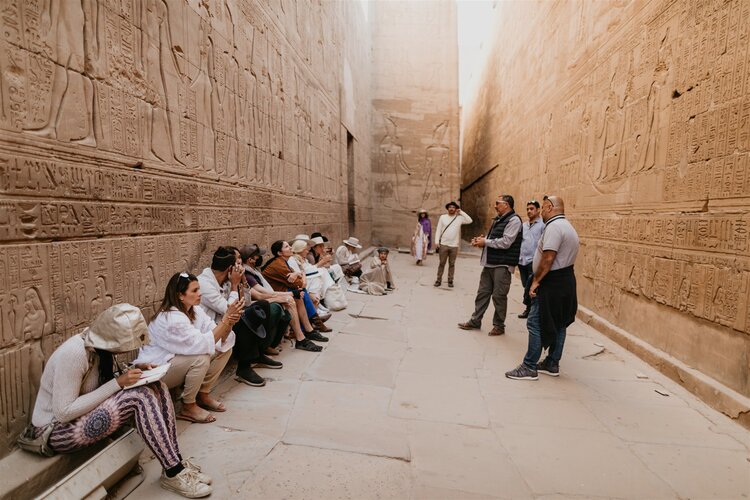 Many people go, some not knowing exactly why except to see the Great Pyramid and the Sphinx. This is certainly reason enough, as today it is still a mystery as to how and when these magnificent structures were built. In fact, even as we speak they are discovering chambers underneath all of the Giza plateau. New artifacts are being found in the sand dunes and hidden treasures under temples are still being uncovered, all of which are reframing the old stories of where we come from. My mentor Mahmoud once said, “It is as if anywhere we dig we will find something.”
Amongst the many stories passed down through the ages, some are of how the Ancient Egyptians were adept at understanding and maintaining the interdependent relationships between the human world, the natural world and the divine world. They were devoted to co-creating heaven on earth and believed that the collaboration of these three worlds were key in this creation. This work included offerings, hymns, songs, prayers and ritual to tend to these relations.
It is believed that within the walls of the temples, and within the actual shapes of the carvings of the divinities, the hidden ancient teachings reside. And that by visiting these temples and sacred sites, the very experience of being there opens up pathways in the brain and in overall consciousness. It is suggested that this was the intent in the creation of these temples, to expand consciousness. Even the locations where they were built were in alignment with each other and the stars, so as to reflect what resides in the heavenly celestial realms. The sky itself on this earth also reflected what was in the neter world, what the Egyptians called the underworld.
There are indeed many reasons why people go to these special lands, some with clear intentions and some with an unknown force that guides them.

Khemet seems to call us for initiation, healing, renewal and activation as we walk with respect and reverence. Every trip we have taken, something magnificent occurs for each person along the journey and some sort of transformation inevitably occurs. With that transformation new life is often born within, which in turn inspires and even directs the next phases of our path. It is as if what lies hidden in the land and in the walls of the temples transmit and communicate to and through us, awakening new doorways of consciousness. We gracefully wake up further to something older, more ancient and even closer to what feels like cosmic truth. What awakens inside each of us can, and often does, play a monumental role in what we create for this life and the future.
So we go to the Holy Lands of Ancient Egypt to make offerings and prayers, to honor with reverence and gratitude and to tread lightly with clear vessels. We keep our eyes open and ears listening, and maintain a humble heart with no desire other than to learn. From this place it is likely that the most memorable and activational experiences of our lives will unfold.
We traverse to the Holy Lands for unique journeys as each group calls forward what is needed & useful for their own consciousness and initiation.
We humbly invite you on this pilgrimage with us.
-Isis, Ericardo + Orion